by Rebecka Pecora
in Technology News

Thin and light computers will finally cross the 5GHz barrier with Intel’s latest flagship 11th-gen U-series chip. Announced at Intel’s Computex keynote tonight, the Core i7-1195G7 will be able to reach 5GHz on a single core thanks to Intel’s Turbo Boost Max 3.0. And, as part of this slight refresh, the company also announced the i5-1155G7, which offers a few speed improvements over the previous top-end i5. Normally we’d expect even bigger news from Intel at Computex, but this year’s virtual event doesn’t have the cachet of the usual Taipei tech fests. (At least there’s something — I genuinely missed the late-night Computex events in 2020.)

Beyond hitting 5GHz, the new processors don’t offer much in the way of surprises. The 1195G7 still packs four cores and eight threads, and it features 96 Intel Xe graphics cores like the 1185G7. Basically, they’re a way to deliver a small upgrade to PCs coming this fall. The 11th-gen U-series were formally introduced last September, so having fresher hardware could help Intel better compete against AMD’s ultraportable 5000 series chips.

Intel also announced its first 5G M.2 module, which was developed together with MediaTek after Intel sold its 5G assets to Apple. Creatively dubbed “Intel 5G Solution 5000,” it will make it easier for PC makers to plug in that wireless tech in their upcoming laptops. The module will supports slower sub-6GHz spectrum, and it’ll appear in laptops from Acer, ASUS, HP and others later this year.

Intel claims there are also over 30 designs geared up for 2022. Given the slow rollout of 5G throughout the US and much of the world, though, it’s unclear if average consumers will really be demanding 5G built into PCs by next year. (The situation may be different for pro customers, but I’d wager they’d be better served by fast millimeter wave 5G.)

In the briefest sense, Intel previewed its new 11th-gen NUC (Next Unit of Computing) tiny desktop at a Computex briefing as well. PCMag reports that it’ll be the first NUC to support a full-sized video card, making it even bigger than the NUC 9 Extreme we reviewed last year. That model could only hold smaller 8-inch GPUs, but that seemed like a decent tradeoff for its compact size. As the NUC gets bigger, there’s clearly less differentiating it from other small form factor PC designs. 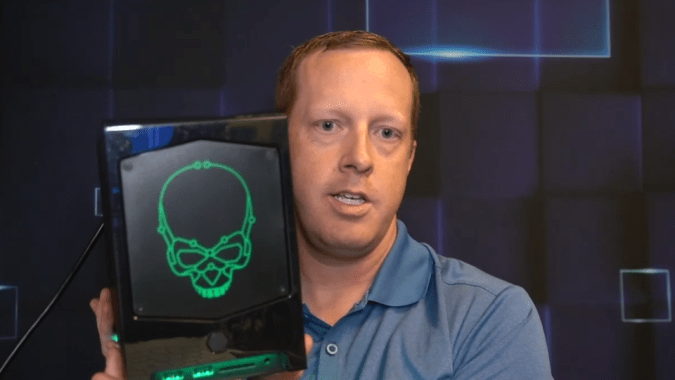 The NUC 11 Extreme will be powered by an 11th-gen H-series CPU, so we’d expect the platform upgrades that accompany that chip, like PCI Express 4.0 speeds and Wi-Fi 6E. Since this was just a tease, there aren’t any pricing or availability details yet.

Huawei HarmonyOS will be coming to these phones next week